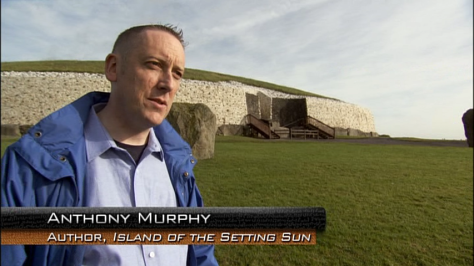 I’m an author and journalist living in Drogheda, Ireland. I’ve been writing since I was about five, and even in my early years I was banging away on my father’s old typewriter. I’m interested in many things, but my books are primarily inspired by the ancient myths and monuments of the Boyne Valley, where the world-famous stone age monuments of Newgrange, Knowth and Dowth are located, only a few miles from where I live.

I write both fiction and non-fiction. Perhaps my most well-known book is ‘Island of the Setting Sun’, which was the result of eight years of research with the artist Richard Moore. Since then, I wrote a book about Newgrange and have more recently followed my lifelong ambition to write novels, with the publication first of my novella, Land of the Ever-Living Ones, followed by the more recent publication of my novel ‘The Cry of the Sebac’.

It is probably the desire of most writers to make a living from their craft, and to become full-time authors. This is also my dream. But while dreaming, and in order to keep the kids fed and the mortgage paid, I work in the newspaper industry. I was the Design Editor at the Drogheda Independent before moving to a rival newspaper, the Drogheda Leader, as Editor. I then became Editor of the Dundalk Democrat newspaper, and currently I work as a sub editor and graphic designer at the Irish Farmers Journal and The Irish Field newspapers. It’s now 22 years since I got my first job in newspapers. You could say I’m a bit obsessed with journalism. But I’m also obsessed with writing, and I write as often as possible.

I run the very successful Mythical Ireland website, and these days a lot of my new writing can be found on its blog. I’m currently working on another non-fiction book about mythology, but I firmly believe that there’s at least another dozen books in me … [1]

Island of the Setting Sun: In Search of Ireland’s Ancient Astronomers

Island of the Setting Sun is the story of the sophisticated and enigmatic people who lived in Ireland around 6,000 years ago: the megalithic builders of the Stone Age. Archaeologists have been probing their building sites over the last fifty years, uncovering carvings, artifacts and dating materials that answer many questions about the people, yet pose even more about their purpose and genesis. This updated and revised second edition of this lavishly illustrated book presents evidence demonstrating that the builders of monuments such as Newgrange and its Boyne Valley counterparts were adept astronomers, cunning engineers, and capable surveyors.

In the past two centuries, what has become clear from the mountains of research that have been carried out on the ancient and magnificent Newgrange monument in Ireland’s Boyne Valley is that it is a uniquely special place. Its construction was carried out by an advanced agrarian community who had developed keen skills in the sciences of astronomy, engineering, and architecture. In a deeply moving, poetic, and philosophical exploration, writer and researcher Anthony Murphy looks beyond the archaeology and the astronomy to reveal a much more profound and sacred vision of the very spirit of the people who were driven to such marvelous and wondrous efforts.

Mythical Ireland: New Light on the Ancient Past

A fascinating journey through time, landscape, and the human spirit. Dealing with archaeology, interpretive mythography, cosmology, and cosmogony, Murphy seeks a core meaning; something beyond academia’s functional interpretations of Ireland’s past 5,000 years. Along the way, he delves into enthralling aspects of this journey: how much knowledge did locals have of Newgrange before it was excavated? Who is the Cailleach, the ubiquitous ancient hag goddess? What happened to make Ireland’s Stonehenge disappear? What connects Fourknocks, a tiny passage-tomb, with the stones of Newgrange? What were the indigenous Irish myths about the Milky Way? Did someone try to steal the Tara Brooch? Why are there myths about flooded towns and cities? With exquisite photographs of the Irish landscape and ancient monuments, Murphy invokes the druids and poets of the Boyne, and thus the s¡dhe (spirits) of ancient texts are reawakened for our turbulent, modern world.

Land of the Ever-Living Ones

Land of the Ever-Living Ones is an extraordinary dialogue between an old man and a young boy that reaches into cosmic and spiritual realms. In one fireside conversation, they explore the universe with discussion about many different things, including natural phenomena, the mysteries of life and the question of what happens to us when we die. The old man (sean-draoi) has gained much knowledge and wisdom during his life, and readily imparts it to the eager young boy, who is full of questions.

Tír na mBeo (Land of the Ever-Living Ones) was an ancient Irish name for the otherworld, the home of deities, spirits and ancestors. It was believed to be a place where there is no sickness or old age and where happiness lasts forever. In this wide-ranging conversation, the man takes the boy on a journey into his own ancestral past, and through lesson, metaphor, story and dream, creates for him a stunning insight into his spiritual existence and his quest for eternity.

The journey is a magical and powerful one, evoking both ecstasy and melancholy, for lost ancestors, for the frailties of mankind, and for the sometimes harsh lessons of worldly life. However, it is an optimistic tale, one that stirs up great aspiration for the eventual destiny of the boy, and for all his kin. Its central message is one of hope – a reminder that light will always emerge out of the darkness, and that all our struggles on this earth are not in vain.

The Cry of the Sebac

One boy can be more powerful than an army.

A boy meets a mysterious talking bird, a floating hawk who claims to have lived forever. Guided by the bird, he glimpses his own destiny. He alone must save mankind from rushing over the precipice to his doom. The boy will have to prevent an apocalypse. But how? The bird, who calls himself the Sebac Gaoth (Hawk on the Wind), takes him on an extraordinary journey through mind and space to meet the Tuatha Dé Danann, those who are foretold to come to the aid of man for a battle to save the world. In the process of revelation, the boy helps the Sebac to realise something of his own origins and destiny.