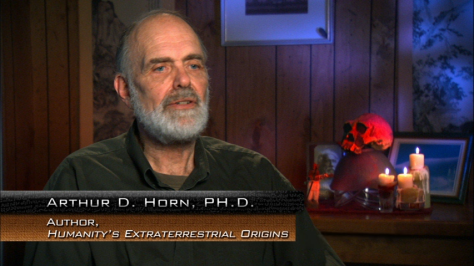 Arthur David Horn received his Ph.D. degree from Yale University in 1976, majoring in biological anthropology. After graduating, he taught the same subject for fourteen years as a professor at Colorado State University.

In 1988 he met a woman from California who was an alternate-minded/spiritual individual. That synchronicity changed his life and perspective dramatically.

After a great deal of research and reflection, Dr. Horn realized that the belief systems we have been taught regarding the origins of our physical bodies are not true. Rather, they serve an agenda that, for the most part, Western religious institutions and governments have propagated for their own selfish purposes, and to control the minds of the masses.

When Dr. Horn realized this, he felt a deep need to retain a sense of personal and professional integrity, and resigned from his professorship. He simply could not teach the establishment’s views of humanity’s physical origins to his students anymore. He then wrote the above mentioned book while living a simple life in Mt. Shasta, CA with his wife. And he has done an outstanding job of it.

I have a great deal of admiration for people like this. It’s not easy to step outside consensus reality and walk away from one’s “previous” life. Especially after having spent years of hard work obtaining a Ph.D. degree.

Building upon his extensive knowledge of evolutionary patterns and forces, Dr. Horn tells us there were unexplained sudden jumps or explosions in the distant past, which caused new categories of life forms to appear, including pre-humans.

Furthermore, there have been instances in which various life forms have appeared simultaneously, or in parallel with one another, rather than in a gradual step-by-step fashion, as is usually the case with evolution.

These mysterious bursts and simultaneous jumps in evolution cannot be explained by today’s scientific theories, including Darwinism. Rather, it’s as though an otherworldly force influenced these natural processes by speeding up what would normally take millions of years to unfold. And this applies to the physical bodies we, as spirits, occupy today.

Dr. Horn looks back over the sequence of pre-human physical forms that began to appear 4-5 million years ago. Once again there were the same mysterious jumps in form and appearance that sped up the emergence of our current physical bodies. These spurts cannot be explained by current theories of evolution. It appears that off planet forces sped things up rather than letting nature take its course. The question is why? [1]

Humanity’s Extraterrestrial Origins: ET influences on Humankind’s Biololgical & Cultural Evolution, by Dr. Arthur David Horn with Lynette Mallory-Horn. New edition published in Germany by Silberschnur. Forward by Erich von Daniken. Arthur & Lynette Horn present their hypotheses on the extraterrestrial origins of our species. This book provides mankind with a new awareness that encapsulates & integrates many of the universal teachings for all people of all walks of life, from many dimensions of truth! Val Valerian, author of the Matrix books, states “A thought provoking journey that picks up where Zecharia Sitchin & William Bramley left off. A very vital piece of literature that provides a synthesis of existing work on human evolution, adds the unique perspective of anthropology & starts us well on our way into unknown territory behind the evolution of humanoid life forms on planet Earth.” Dr. Horn was educated at Yale University & is a former professor of biological anthropology for fourteen years. He resigned from teaching evolution shortly after his research clearly proved to him that mankind developed, in part, from outside intervention by a higher intelligence as opposed to natural evolution.