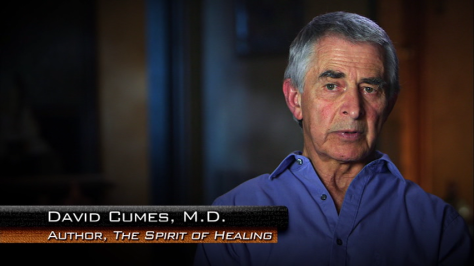 David Cumes was born and raised in South Africa and has been exploring ancient African wisdom for contemporary ideas on healing for some time. He has been initiated as an African shaman (sangoma or inyanga) and can testify personally to the value of their divining techniques, the powerful rituals and plant medicines, the altered states of consciousness induced by drumming and the diagnostic power of the “bones.” [1]

“The ability to move the spirit that heals probably has existed as long as humans have walked the planet, and we need to familiarize ourselves with its mechanism…As doctors, we need to recognize our ability to facilitate or aggravate the patient’s Inner Healer not only by our deeds, words and body language, but also by our wishes and thoughts. The positive desires and prayers of the physician are just as important as the affirmations and visualizations of the patient in the healing process.”

Little in Dave Cumes’s upbringing could have predicted the life he would follow after he turned 40. Trained as an M.D. and then a surgeon in South Africa Dave immigrated to California with his family in 1975 to begin a residency in urological surgery at Stanford Medical Center. After serving on the faculty at Stanford Dave finally settled into private practice in Santa Barbara. Once the practice began to be successful Dave returned to South Africa to fulfill a dream he had as a child. He wanted to spend time with the last of the hunter-gatherers of the continent – the Kalahari Bushmen.

Dave’s quest began after this extended visit to the Bushmen in 1987 where he experienced their intimacy with nature and felt their untainted spirit. Here he was able to restore his relationship with wilderness in terms of what he had experienced in the Kalahari and what he termed “wilderness rapture.” He began to formulate a theory around the use of wilderness for spiritual practice and healing which he integrated into both his yoga practice and his medicine. He distilled this into a philosophy of the how-to’s of “wilderness rapture” and wrote two books on healing, the first based on using nature as “medicine,” and the second (The Spirit of Healing,) the general principles of what it is that makes us heal. After writing Inner Passages Outer Journeys he founded Inward Bound and began to take people into remote wilderness areas for restoration and self-transformation. Inner Passages Outer Journeys was the theoretical side of how this worked, and the Inward Bound trips were the experiential part of the philosophy. He continued his surgical practice with renewed equanimity and balanced his life with yoga and periodic trips into the outback.

On trips to Peru he was exposed to curanderos or shamans and began to realize they had deep knowledge of healing that in spite of all his medical training he was not privy to. When he went back to South Africa and began to consult sangomas about the logistics of upcoming Inward Bound journeys they would throw the bones and give good practical advice. However, in addition they would invariably look at him and add, “the bones, they say you should be doing this work; the bones say you should be doing African medicine; your grandmother’s bone is telling you to be initiated; your ancestors want you back here in Africa!” After several such readings, all of them given by different sangomas, none of whom knew each other, he was still not committed. After a couple of years, out of frustration for his reticence, the ancestors revealed themselves directly to him through a woman sangoma who went into a trance. They told him in no uncertain terms that he was ignoring his destiny and needed to be initiated. After this powerful revelation he relented.

He found an elderly Zulu sangoma in Swaziland who agreed to teach him. P.H. Mntshali threw the bones and there was no dispute. The training began on the cusp of the millennium. Since that time his life has changed profoundly. The journey that he undertook chose him, he did not choose it.

Dave was told by the bones and various expert sangomas going into trance that the ancestors on his mother’s side were the ones who would help him become a different kind of healer. Moreover, there was the spirit of a black woman who had been a sangoma and a friend of his maternal grandmother who wanted to be the guiding spirit for the divining bones. He was instructed to build an ndumba (healing hut) in California where the ancestors could feel at home and assist him. The bones were going to be his main tool for a new kind of healing, and Mntshali who was a master, was to teach him. Once he started the work, his incessant migraines, an indication of the “ancestor sickness,” went away. Dave’s third book “Africa in my Bones” describes this initiation.

After being initiated Dave built an indigenous healing center a little south of the Limpopo River where he expanded his knowledge of healing plants, fulfilled his longing to spend extended periods in the bush, and deepened This  resulted in publication of a fourth book about the area’s healing plants. Although Dave has given up ownership of the site, it remains very much a part of his psyche. Dave’s fifth book “Messages from the Ancestors – Wisdom for the Way was co-authored with Maryellen Kelley a well known educator in Santa Barbara who after Dave’s initiation also began to receive dreams from the ancestors.

Dave is a bridge between Western medicine and indigenous healing wisdom. His roots are in Africa but he is also convinced that since humanity began there, so too did the first healing techniques. His quest is to bring the primal essence of these methods back to the West. [2]

The Spirit of Healing

Venture Into the Wilderness to Rediscover the Healing Force

“‘The Spirit of Healing’ is a compelling book that demonstrates how nature is a profound teacher of our own nature.”

Angeles Arrien, Ph.D., author of
The Four-Fold Way and Signs of Life

“Dr. David Cumes has studied healing around the world. He writes wisely about the most basic elements of health and illness. This book is a return to ancient wisdom seen through the eyes of a skilled surgeon, and a penetrating glimpse of the medicine of the future.”

The Spirit of Healing is out of print, though recycled copies are still available through Amazon.com and other sources.

This revised edition below can be downloaded as a PDF…
The_Spirit_of_Healing.