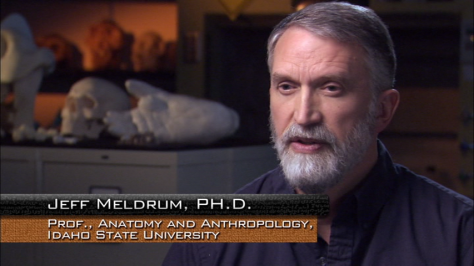 Dr. Jeff Meldrum is a Full Professor of Anatomy & Anthropology at Idaho State University (since 1993). He teaches human anatomy in the graduate health professions programs. His research encompasses questions of vertebrate evolutionary morphology generally, primate locomotor adaptations more particularly, and especially the emergence of modern human bipedalism. His co-edited volume, From Biped to Strider: the Emergence of Modern Human Walking, Running, and Resource Transport, proposes a more recent innovation of modern striding gait than previously assumed. His interest in the footprints attributed to sasquatch, was piqued when he examined a set of 15-inch tracks in Washington, in 1996. Now his lab houses well over 300 footprint casts attributed to this mystery primate. He conducts collaborative laboratory and field research throughout North America, and the world (e.g. China, Russia), and has spoken about his findings in numerous popular and professional publications, interviews, television and radio appearances, public and professional presentations. He is author of Sasquatch: Legend Meets Science (Tom Doherty Publishers), which explores his and other scientists’ evaluations of the contemporary evidence, and also affords deference to tribal people’s traditional knowledge of this subject. He has also published two field guides, one focusing on sasquatch, the second casting the net more broadly to consider the potential of relict hominoids around the world (Paradise Cay Publishing). He is editor-in-chief of the scholarly refereed journal, The Relict Hominoid Inquiry. [1]