L. A. Marzulli is an author, lecturer and film maker. He has penned 10 books including The Nephilim Trilogy which made the CBA best sellers list.

He received an honorary doctorate for the series from his mentor Dr. I. D. E. Thomas, who was the Provost at Pacific International University.

He was also honored with the Gold Medallion award from Chuck Missler at the K-House conference in 2014. (Which amounts to a second Honorary Doctorate!)

His series On the Trail of the Nephilim I & II are full-color, over-sized books, which uncover startling evidence that there has been a massive cover up of what he believes are the remains of the Nephilim, the giants mentioned in the Bible.

L. A. Marzulli teamed up with film producer Richard Shaw to create The Watchers series.

There are now TEN installments in the series and Watchers 7: UFO Physical Evidence, won UFO Best Film and the Peoples Choice Awards, at the UFO Congress in 2014!

Marzulli and Shaw took their second trip to Peru in January of 2014, filming ancient artifacts and megalithic structures at various locations, and also filmed the unwrapping of a 2000 year old mummy skull, at Sr. Juan Navarro’s Paracas History Museum, which was revealed in Watchers 8!

In Watchers 10: DNA, as well as his new book Nephilim Hybrids, Marzulli and Shaw reveal the long-awaited DNA evidence from the Paracas Skulls. In Marzulli’s opinion, what the DNA reveals re-writes history as we know it.

Watchers 10 and the book Nephilim Hybrids, is packed with information concerning what Marzulli believes may be a massive cover up.

Marzulli has launched a new series, The Watchman Chronicles and his first independent film will be released in March. The title of the series is In Their Own Words: UFOs are Real!

This is a hard-hitting expose on the burgeoning UFO phenomena. The series is geared toward the skeptic as a wake-up call to what Marzulli calls: The Coming Great Deception.

Marzulli is a frank super-naturalists who has lectured on the subjects of UFOs, The Nephilim, and ancient prophetic texts, presenting his exhaustive research at conferences and churches, as well as appearances and interviews on numerous national and international radio and television programs. [1]

The Alien Interviews: Conversations with people who experienced UFO Contacts

This book exposes the UFO phenomena, alien abductions, cattle mutilations, alien implants, and direct contact. It postulates that these are interdimensional beings not entities from another planet. It further exposes what may be the coming great deception as prophesied in the Bible.

This is the new release of The Nephilim Trilogy with all 3 books under one book cover. Nephilim:The Truth is Here The Unholy Deception, and The Revealing. Book 1, Nephilim : The Truth is Here. Synopsis : Two years ago, Art “Mac” MacKenzie was a respected newspaper journalist with a wonderful family and a great future. Now he lives by himself eking out an existence as a freelance writer. His faith in God, humanity and virtually everything else is gone. What’s left is a pile of bills and the ache of his eldest son’s death. Enter a woman in a psychiatric ward, with an off-the-wall story of how aliens abducted her, created a baby within her, and later stole it. From her seemingly twisted account springs the potential media story of the century…and more trouble than Mac has ever imagined. In this engrossing page-turner, Mac follows his story to Israel, where he comes across the remains of one of the nephilim: an ancient biblical giant, sired by demons and born of human woman. The story continues into The Unholy Deception. “The Cadre” claims to have Christ’s body preserved and hidden in an ancient tomb. For journalist Art “Mac” MacKenzie, the scenario smacks of an alien agenda. He determines to unearth the truth at any cost. But the Cadre doesn’t surrender its secrets easily. Mac’s former editor, Jim Cranston, has been found wandering amount the ruins of Machu Picchu with burns on his body and in a constant state of fear. The final book, The Revealing, picks up the story in the Middle East where events seem to be culminating in the fulfillment of ancient prophecies found in an unpublished Dead Sea Scroll. Because of his work exposing the Antichrist, Cardinal Fiorre was murdered by alien hybrids. All his research was destroyed expect for a single diskette. Former reporter Art MacKenzie and his spiritual mentor, Johanen are desperate to try to locate it. This series is a tension-filled story to its thrilling climax. 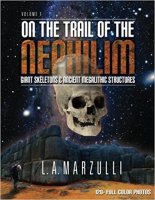 On the Trail of the Nephilim 1

L.A. Marzulli has written this latest book. What you are about to read is not the stuff of science fiction. It’s not a fantastic fable or the musings of an overzealous archaeologist. It’s straight out of the pages of the Bible. The 120+ pictures displayed within this volume have not been altered in any way. What you are about to see is truly ground-breaking revelation–an unparalleled discovery that may leave you in stunned silence. This books is the culmination of a lengthy search for the physical evidence of the Nephilim, the Giants of Old Testament lore. A significant cover-up has taken place over the years, reducing these double digit, gigantic hybrids to the dustbins of history. But make no mistake about it-they were there. Hundreds of excavated graves scattered throughout the would provide evidence of their genetic abomination-the product of the breeding of heavenly angels with the women of Earth during the days of Noah. These ancient builders left behind evidence of their supernatural strength and technological know-how. Their massive, megalithic structures are legendary and evidence of Nephilim architecture abounds worldwide. Marzulli and a team of scientist, archaeologists and scholars traveled to the jungles of a foreign land, perhaps the only place where they could gain access to the unspoiled evidence of this genetic manipulation- PERU-toppling perhaps the greatest cover-up in mankind’s bizarre history.

On the Trail of the Nephilim 2: New Archaeological Research

The Bible is full of strange and supernatural events. But there is none stranger than the events of the sixth chapter of the Book of Genesis. Theologians have speculated and debated this bizarre passage of Scripture for thousands of years–and the debate rages on today hotter than ever! Best-selling author, L.A. Marzulli, lies at the root of this new paradigm, challenging the status quo of historical events and suggesting a cover-up of “gigantic” proportions. His first book on the subject, On the Trail of the Nephilim, Volume 1, opened up the minds of people worldwide, stirring up a controversy that challenges the literal interpretation of Scripture and pushes the boundaries to the very edge. Traveling to Paracas, Peru, and other relatively-unknown places in South America, the author began to hunt for proof of a hybrid race of beings the Bible calls the “Nephilim.” His search left no stone unturned–public museums, private skull and skeleton collections, secret caves known only to locals, interviews with archaeologists and curators…what Marzulli discovered has turned the world upside down, upsetting a few Darwinian apple carts along the way. Once you have laid eyes on a gigantic Nephilim skull, your worldview may change.

Every civilization has stories of gods coming from the sky and producing offspring with human women. Most people tend to dismiss the stories as nothing more than a fanciful tale from a long-gone era.

Others recognize the truth often hidden within the stories, but believe that they tell of a time that is buried in the ancient past and that we no longer have to even contemplate such an occurrence in our time.

Unfortunately for both groups, the Bible is filled with details. Details that not only recount the time long ago when these heavenly beings cohabited with human women and produced a race of giants, but details that indicate a return of those heavenly beings and a renewal of the events now viewed as ancient history.

Perhaps most frightening of all, recent discoveries reveal that it’s no longer prophetic, but the renewal of that breeding program has already begun!

This book gives you personal encounters that people of different walks of life, such as: professionals, layman, clergy, doctors, abductees, and many others that have had experiences with UFO’s and the paranormal. The stories you will read are first hand from those that have had these experiences happen to them.

There are two ways of looking at the events happening in the world around us. The first is that all of these events are just natural phenomena. With this in mind one would look at Israel coming into her ancient homeland after almost 2,000 years of diaspora and would not see any relevance, nor would it matter. To put it bluntly, in this way of thinking one would embrace the world view that there is no god, no prophecy, and no supernatural world. There is only what we can see, hear, taste, smell and observe using the scientific method. Then there is the other world view that embraces The Holy Bible or The Guidebook to the Supernatural that takes the opposite stance on all of these positions. There is a God and He is good. There is a supernatural world and it is manifesting. There are signs that those who have eyes to see and ears to hear can point to and say that His coming—the Second Coming of Jesus—is soon. There is going to be a profound change in human history, and it begins upon His return.

The skeptic asks, where is the promise of His coming for all things continue as before? In my way of thinking based on my worldview, we are seeing the birth pains that Jesus warned us would appear before His return. It would seem that prophetic events are accelerating, as I believe we are seeing the signs that warn us of what is coming on the earth… These are the Days of Chaos.