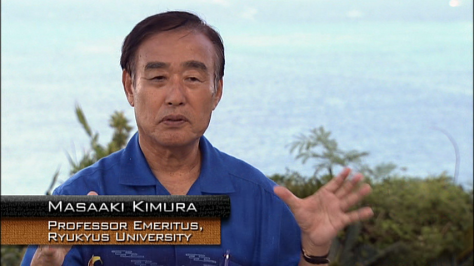 Masaaki Kimura (born 6 November 1940) is a Professor Emeritus from the Faculty of Science of the University of the Ryukyus, Okinawa, Japan.

His specialties are marine geology, geophysics, seismology, volcanology, and marine archaeology. He has extensively researched the formation of the Okinawa Trough, and claimed to have predicted the volcanic eruptions in Miyake Island (1983), Izu Ōshima (1986), and Mount Unzen (1991).

Apart from his geological research, Kimura is best known to the world for his exploration of underwater structures which he claims are ruins of an ancient civilization. These structures were identified by local divers in 1988. In 1992 he studied the so-called Yonaguni Monument and other formations off the coast of Yonaguni, the westernmost of the Ryukyus. In a report given to the 21st Pacific Science Congress in 2007 he suggested that it had been built 2,000 to 3,000 years ago as the sea level then was close to current levels.[1]