Researchers of crop circles have linked modern crop circles to old folkloric tales to support the claim that they are not artificially produced. Circle crops are culture-dependent: they appear mostly in developed and secularized Western countries where people are receptive to New Age beliefs, including Japan, but they don’t appear at all in other zones, such as Muslim countries.

Fungi can cause circular areas of crop to die, probably the origin of tales of “fairie rings”. Tales also mention balls of light many times but never in relation to crop circles. 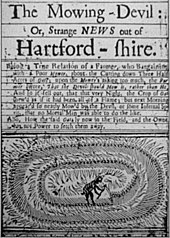 A 17th-century English woodcut called the Mowing-Devil depicts the devil with a scythe mowing (cutting) a circular design in a field of oats. The pamphlet containing the image states that the farmer, disgusted at the wage his mower was demanding for his work, insisted that he would rather have “the devil himself” perform the task. Crop circle researcher Jim Schnabel does not consider this to be a historical precedent for crop circles because the stalks were cut down, not bent. The circular form indicated to the farmer that it had been caused by the devil.

In the 1948 German story Die zwölf Schwäne (The Twelve Swans), a farmer every morning found a circular ring of flattened grain on his field. After several attempts, his son saw twelve princesses disguised as swans, who took off their disguises and danced in the field. Crop rings produced by fungi may have inspired such tales since folklore holds these rings are created by dancing wolves or fairies. [1]