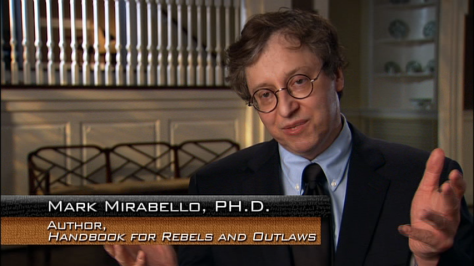 Mirabello has appeared on the History Channel, discussing “deadly cults” in the series called Ancient Aliens (and in America’s Book of Secrets), and he has appeared with Professor Noam Chomsky in M.A. Littler’s maverick film on freedom, the Kingdom of Survival.

Mirabello was a featured guest for an hour-long interview on afterlife concepts on “Open Minds.”  The show, hosted by Regina Meredith, appears on the Gaia Television Network.

Mirabello has been a featured guest on several radio programs and podcasts, including Coast to Coast AM with George Noory, Beyond Reality Radio hosted by Jason Hawes and JV Johnson, Darkness Radio with Dave Schrader and Tim Dennis, Tha Talks with Paul Obertelli and David Parry, The Farkas Files with David Farkas, and many others.
​
Mirabello’s area of expertise is the “outlaw” history on the “frontiers and margins” of human civilization. He lectures on Death and Afterlife Concepts, Alternative Religions and Cults, Secret Societies, Terrorism and Crime, “Banned Books,” Fascist Europe and Nazi Germany, Myths and Legends, Intellectual History, and other subjects.

His publications deal with the supernatural (The Traveler’s Guide to the Afterlife and The Odin Brotherhood), the unnatural (the Pulitzer-nominated horror novella The Cannibal Within), and the natural (Handbook for Rebels and Outlaws).

Handbook for Rebels and Outlaws

A Traveler’s Guide to the Afterlife: Traditions and Beliefs on Death, Dying, and What Lies Beyond

• Examines beliefs from many different cultures on the soul, heaven, hell, and reincarnation; instructions for accessing the different worlds of the afterlife; how one may become a god; and how ethics and the afterlife may not be connected

• Explores techniques to communicate with the dead, including séance instructions

Drawing on death and afterlife traditions from cultures around the world, Mark Mirabello explores the many forms of existence beyond death and each tradition’s instructions to access the afterlife. He examines beliefs on the soul, heaven, hell, and reincarnation and wisdom from Books of the Dead such as the Book of Going Forth by Day from Egypt, the Katha Upanishad from India, the Bardo Thodol from Tibet, the Golden Orphic Tablets from Greece, Lieh Tzu from China, and Heaven and its Wonders and Hell from Things Heard and Seen from 18th-century Europe.

Considering the question “What is Death?” Mirabello provides answers from a wide range of ancient and modern thinkers, including scientist Nicholas Maxwell, the seer Emanuel Swedenborg, 1st-century Buddhist philosopher Nagarjuna, and Greek philosopher Euripides, who opined that we may already be dead and only dreaming we are alive. He explores the trek of the soul through life and death with firsthand accounts of the death journey and notes that what is perceived as death here may actually be life somewhere else. He reveals how, in many traditions, ethics and the afterlife are not connected and how an afterlife is possible even without a god or a soul. Sharing evidence that consciousness is not simply a product of the brain, he offers a strong rebuttal to nihilists, materialists, and the Lokayata philosophical school of India who believe in the “finality” of death. He explains how specters and ghosts are produced and offers techniques to communicate with the dead as well as instructions for an out-of-body experience and the complete procedure for a séance.

With an extensive bibliography of more than 900 sources, this guide offers comprehensive information on afterlife beliefs from the vast majority of cultures around the world and throughout history–a veritable “traveler’s guide” to the afterlife.

First published in 1992, The Odin Brotherhood  is now available in a new and expanded sixth edition with an additional fifty pages.  This edition details the legends, practices, and rituals of the mysterious secret society that is dedicated to the old gods and goddesses of Asgard, and it contains new material on the nature of secret societies, and the lore of Odin and the afterlife.